When Prince Harry and actress Meghan Markle announced their engagement, the world rejoiced—the world began to speculate about what it would mean for a biracial woman to become a British royal. Some hailed Markle, who had an African-American mother and a white father, as Britain’s first “black princess,” a watershed moment for a royal dynasty that had ruled over centuries of slavery and colonialism. However, the people of Buckingham Palace may not be as white as the general public believes. According to some historians, because of bigotry within the royal family and throughout Europe, mixed-race marriages among European royalty were frequently overlooked. Markle may not be the first black member of the British royal after all.

According to historian Mario Valdes, in the 18th century, Queen Charlotte of Mecklenburg-Strelitz, who married Britain’s George III in 1761, was likewise black. He claims Charlotte was linked to a black member of the Portuguese royal family, Margarita de Castro y Sousa. However, much of the alleged evidence of Charlotte’s race is based on descriptions of her face: she was commonly thought to have African-American features.

Charlotte was mocked for her appearance during her reign as Queen Consort, with Sir Walter Scott writing that Charlotte’s family was full of “ill-colored, orang-outang looking figures,” and her relationship to “the warlike Vandal race”—an ancient Germanic tribe that lived in North Africa—was said to be preserved in her appearance during her coronation ceremony. It’s probable that those who thought Charlotte was ugly merely insulted her based on racial prejudices. Valdes, on the other hand, claims she was black, having dark skin and features typical of someone of African heritage. This, however, does not appear in modern portraits or even cartoons of the queen. That, according to Valdes, is proof of history’s actual whitewashing. There’s has been black royalty, and modern kingdoms may be found all over Africa. In Europe, however, kingship was traditionally reserved for members of wealthy white families. Having a black-white would have complicated contemporaneous debates over race and slavery in the time of George III, who signed the legislation outlawing the British slave trade.

Markle, will not, in any event, be the first member of a modern mixed-race marriage.

Black women have also been married by modern members of the Habsburg dynasty, as well as monarchs from Liechtenstein and Monaco. Though Markle has been outspoken about her racial identity and the discrimination she and her family have faced, experiencing, expecting her to advocate for black and mixed-race Britons may be a stretch. Sociologist Kehinde Andrews said, “She won’t be permitted to be a black princess. The only way she’ll be welcomed is if she pretends to be white.”Markle might be outspoken about her race, but it will take more than a few isolated mixed-race marriages inside the British monarchy to overcome the country’s ugly history of slavery, colonialism, and racism. 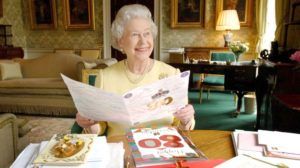 Reasons Why Queen Elizabeth Is a Glorious Grandma
Here are 20 reasons why Queen Elizabeth is actually a hip and hop grandmother. The 91-year-old Queen has racked up experiences, privileges, awards, and accolades like none other. Prince George ...
click here to read more
Advertisement - Continue reading below
Share  On Facebook

Breathtaking Photos of Homeless People Before and After Getting...

The Deadliest Animal in Each State in America

Think Twice Before Purchasing These Foods At Aldis

VHS Tapes Worth Hundreds May Be Hiding in Your...

Festival Fails That Captured A Little Too Much

Celebrities Who Married Their Biggest Fan

Fascinating Facts About Early Humans That You Didn’t Learn...

Counting Down US States From Most to Least Educated