What Will Probably Happen When The Queen Of England Passes

The royal family has been one of the hot seats of the media forever. People are not tired of buzzing about their lifestyles, relationships, and work. One of the most awaited events in the royal family is the ‘turnover’ of the crown. This tradition started with the conquest of Norman to England in the 11th century, wherein it assumes that the right of succession belongs to the first-born son and he will continue the honor of shouldering the responsibilities of the Commonwealth and the people.

At present time, everyone’s eyes are on the sovereign one – Queen Elizabeth. What will happen when she passes away? Operation London Bridge pertains to the plan that was made by the officials and the monarch in preparation for the death of Queen Elizabeth as well as the ‘turn over’. This is for the Prime Minister and media to be assembled on what to do on her death.  This plan centers on the things that must happen ‘after 10 days of the Queen’s death.

1st Day – At 10 am at St. James’ Palace, Prince Charles will be crowned as the ‘King’ and the Royal Exchange in the City of London, validating him as ‘King’. All the attendees including the PM and senior ministers must wear morning dress or lounge suits with black or dark ties.  After such, the parliament will give their message of condolences to the royal family, parliamentary businesses will be off for 10 days, and pay tribute to the House of Commons.

2nd Day – The queen’s coffin will be returned to Buckingham Palace and will be met by the Prime Minister and cabinet ministers. The proclamation will be pronounced in the delegated administrations and the tributes will be carried on in parliament.

3rd Day – King Charles will obtain the condolences at Westminster Hall in the morning and in the afternoon, he will go on board a tour of the United Kingdom.

4th Day – King Charles will accept other condolences at Hillsborough Castle and take part in a service at St. Anne’s Cathedral in Belfast and the funeral procession of the queen’s coffin will be from Buckingham Palace to the Palace of Westminster.

5th Day – The service will take place in Westminster Hall after the queen’s coffin arrives.

6th Day – 9th Day – The queen’s coffin will lie in the Palace of Westminster for three days and will be opened for public viewing in 23 hours every day. Within these days, the government departments will consume their time preparing for the funeral.

10th day – The funeral will take place at Westminster Abbey where they spent two minutes of silence at noon across the United Kingdom. The committal service will be held in St. George’s Chapel at Windsor Castle and the queen will be buried in the castle’s King George VI Memorial Chapel.

From this day onwards, King Charles will take the crown and commit himself to the people of the United Kingdom and to the Commonwealth. 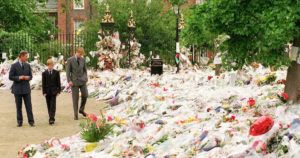 The Royal Family's Tumultuous Modern History in Photos
For centuries the British royal family have been one of the world’s most well-known and revered monarchies. However, in the modern age (post-World War II), the family’s image has gone ...
click here to read more
Advertisement - Continue reading below
Share  On Facebook

Hilarious License Plates That Are Sure to Brighten Up...

Cutest Pets at the Vet Moments

The Ups and Downs of Prince William and Kate...

These Cooking Hacks Will Make You Feel Like a...

The Funniest, Most Clever Fan Signs at Sporting Events

‘All in the Family’ Facts You Didn’t Know

Celebrities Who Have Never Been Married

Titanic Photos Revealed & What The Film Got Wrong

A Timeline of the Relationship Between Prince Charles And...